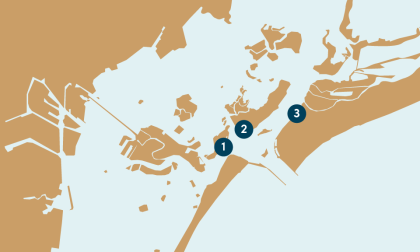 The Serenissima Republic and the French and Austrian empires contributed to build the fortifications over time in order to protect the city and the lagoon. In 810 the lagoon itself, difficult to navigate due to the presence of shoals and sandbanks, was the main safeguard of Venice. With the growing influence of the Serenissima Republic, the protection of the city was entrusted to the fleet of the Arsenal that served as a fortress and garrison house.

Centuries later several other defensive structures were also built around the lagoon. The fortification system in the lagoon includes: Sant’Andrea Fort (1), definitely one of the most suggestive defensive buildings, that rises at the Venice main entrance from the sea in front of Lido to control the access from the sea, where enemy fleets were held back with artillery back in the days. A little north of Sant’Andrea there is the Maximilian Tower (2) in Sant’Erasmo island. This fortress was built by the Austrians during the second half of the XIX century. Going north you come across the Forte Vecchio (Old Fort) (3) located in Treporti that used to control the water access to the northern sector of the lagoon.

We use cookies to ensure that we give you the best experience on our website. If you continue to use this site we will assume that you are happy with it.Ok