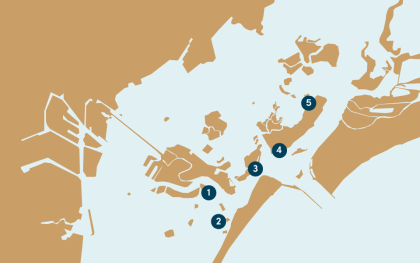 In the past many islands have been colonized by monks, nuns and religious people. Just across San Marco’s basin lies the island of San Giorgio Maggiore (1). The beautiful Palladian façade of the church invites people to visit the whole island, also called the “cypress island” as the first settlement of a Benedictine community. The island offers a breathtaking view of Venice from the top of the bell tower. Proceeding toward Lido meet a little jewel of the lagoon, San Lazzaro degli Armeni island (2), dedicated to San Lazzaro, patron of leprous, in fact the island was a leper hospital at first. After few centuries of decay, at the beginning of the 18th century, a community of Armenian monks settled there. They turned the old building into a monastery.

The islands became an incredible cultural centre, world famous for the collection of books and the typography opened in 1789. Heading north, after passing by the island of Sant’Andrea (3) and Sant’Erasmo (4), get off at San Francesco del Deserto island (5), recognizable by a small cypress Wood, in the middle of the lagoon between Sant’Erasmo and Burano. Since 1227 it has housed a friary founded by San Francesco from Assisi on his way back from the Holy Land during the 5th crusade. It is here that the “Miracle of the birds” took place. The tour starts from the little church and small cloister to a stroll in the beautiful garden.

We use cookies to ensure that we give you the best experience on our website. If you continue to use this site we will assume that you are happy with it.Ok